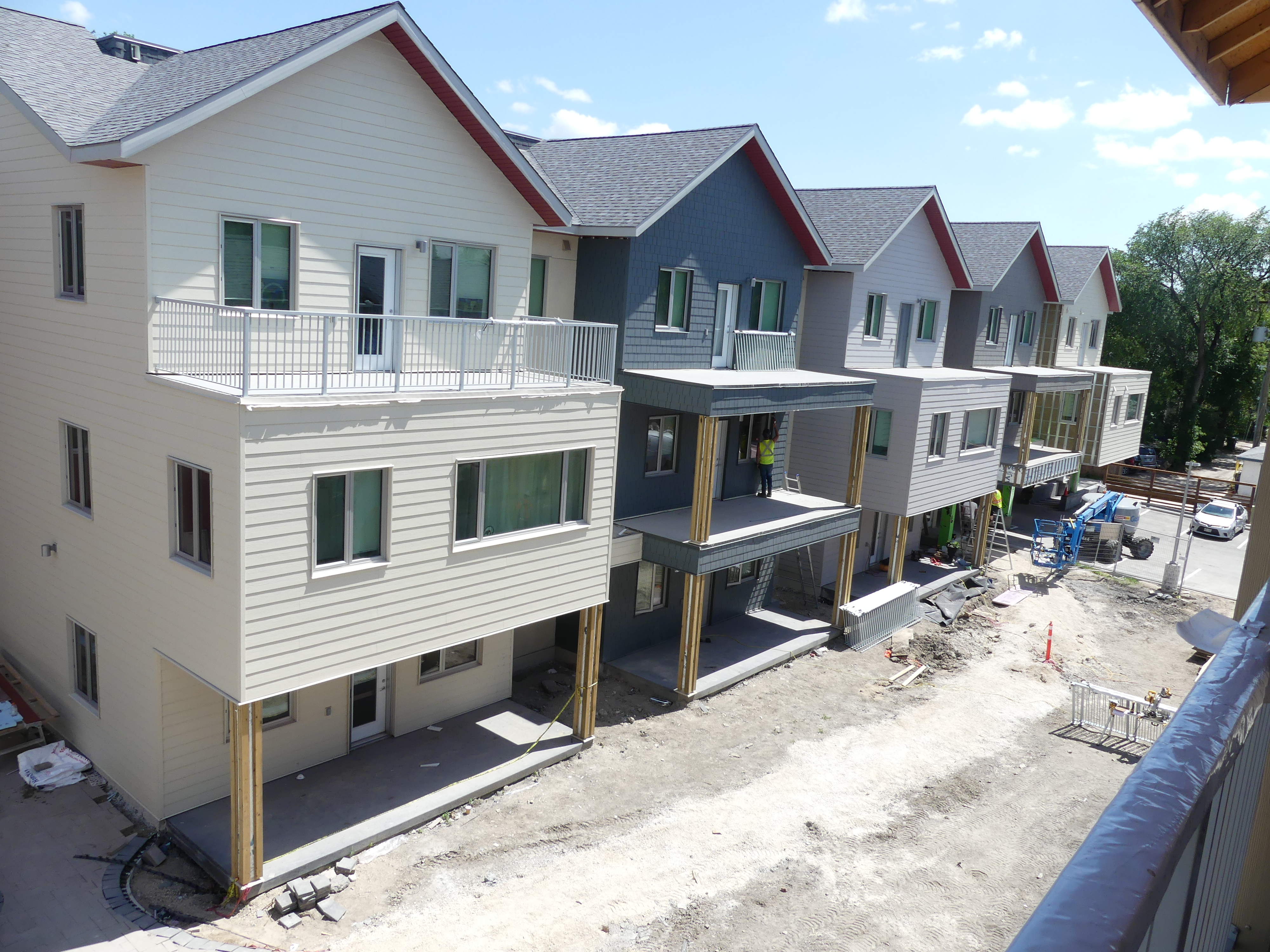 I think everything between the Rockies and Winnipeg is the Prairies.  It certainly gets suddenly flat when you come out of the Rockies!!!  However, one would not describe the co-ops I met over the last few days as flat.  I encountered much the same spirit of renewal, change and vision as I encountered in BC.  Different environments – different approaches – but the same co-operative enterprise and community.

First up, Sarah and Jacky were my hosts at 66 home Sunnyhill Housing Co-op in Calgary.  The co-op was developed in 1978 in a city centre area through local activity to bring in families, keep the local school open, and maintain the local community.  They enjoyed strong political support then, and still do now – important in their current negotiations with Calgary over lease renewal.  It’s a mature co-op, experiencing peaks and troughs that I have heard about in other Canadian co-ops – a proliferation of committees, not enough active volunteers to run them, some outdated policies, and ongoing grappling with leases.  But the outcome … a strong community feel – great homes – city centre affordability where otherwise families and ordinary people would be priced out.  We talked about NACHA and SACHA – Northern and Southern Alberta’s co-op representative bodies and how the latter provides services to Sunnyhill.  Supportive of the Vancouver Community Land Trust approach, my hosts are part of the vanguard of Canadian co-operators keen to see change and different approaches to strengthen the sustainability of the sector.

The tour ended up at the excellent Village Canadien Housing Co-op, where Linda (the Vice President) – and David (the Manager) – discussed the development of their three sites and showed me some of their 231 homes.  The River Road site was a building site when I visited, with most of the 150 homes developed in 1976 undergoing a major refurbishment.  The scale of the co-op enables it to employ a staff team and meant it could provide a safe merger haven for the small 8 home Maurepas Housing Co-op in 2016 which had been having problems.  With ambitions to develop more homes on the River Road site, Village Canadien has and is taking an approach to increase its scale to enable it to gradually become autonomous from Government subsidies.

My last two days in Winnipeg were spent exploring new co-operative housing developments at Old Grace Housing Co-op and at Westman Seniors Housing Co-op (a 2 hour drive along a very straight and flat road across the Prairies – wow – that was some experience).  Both astonishing community-led achievements.

Sandra and Laura – my hosts at Old Grace – showed me round the almost completed 60 home Old Grace (shown in the photograph).  Located in what was described as the “Granola Belt” desirable Wolseley area of Winnipeg –scheme viability requires market share payments between $72K and $133K against each of the homes, with 34 homes subsidised through Manitoba Province to bring share payments down to $17K.  With this still being unaffordable for those on low incomes, various foundations and churches further sponsor share payments for 4 x 4 bedroomed properties, currently lived in by refugee families.  The result is a huge cross section of community across different income levels, and across ages and families, although it is challenging for young families to afford the market share properties.  With members having moved in in March and with ongoing works being carried out, my hosts were a little frazzled with lists of defects needing to be sorted and balcony railings just going up.  But Old Grace is already a vibrant community, with gardening, a fitness group and other activities organically forming; wonderful community facilities designed to encourage interaction; and members showing warm appreciation for those on the development group at a recent packed members meeting.

Similarly, the 63 home second phase of Westman Seniors had been financed partially through market share payments from 15 of its residents.  My host, Harvey, showed me round both the second phase, occupied in May 2018, and the 34 home first phase – developed in 2013 following public meetings held by the Seniors for Seniors – a co-operative formed in 2008 to promote activities for seniors.  Both phases are impressive developments, providing much needed homes for seniors in Brandon in a community-based setting alongside excellent community facilities.  I was honoured to be invited along to birthday celebrations for four residents in the first phase building, but sadly I couldn’t make it to the next day’s AGM where members from both phases would be coming together for the first time to jointly elect the Board.

Both Old Grace and Westman Seniors have long waiting lists, including for their market share homes.  I had previously met with development consultant Karl Falk who had worked with both schemes (Karl’s co-operative blood is demonstrated by his working at risk for a percentage of the scheme costs, enabling them to proceed).  We discussed how these schemes had only been possible within the funding frameworks that existed at that time through raising equity through some market shares.  This had been possible in these two co-ops through substantial community buy-in, the desirability of the area in Old Grace’s case, and the need for quality homes for seniors in Westman’s case.  It is difficult to say whether market shares would generate as much interest in lower value areas.

All of the co-ops visited demonstrated the same forward and innovative thinking displayed in BC – but with different solutions meeting different local needs in different ways.  Now onto Ontario.  As I write this I am en flight to Toronto – sadly not able to watch the England/Belgium game!!!  The sacrifices I make eh?