Co-operative Housing for All 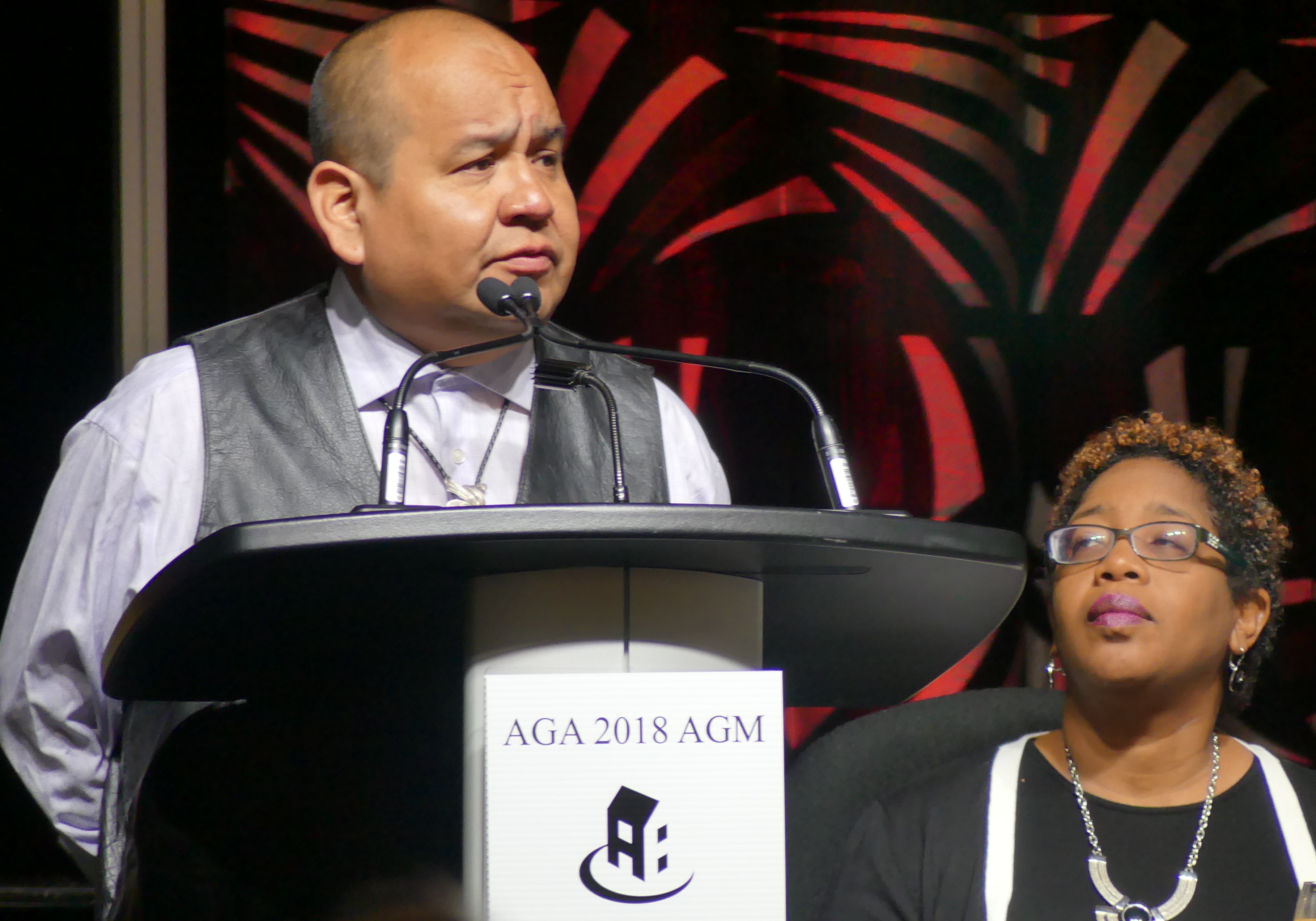 So – the end of the Co-operative Housing Federation of Canada’s Annual Meeting last night.  My head is full of the incredibly warm welcome I have received from so many wonderful Canadian co-operators – I have been an honoured guest amongst them – “so you’re the English guy?” – and a jumble of ideas and impressions of how things work over here and the messages I need to take back to our sector in the UK.

One thing I certainly did not expect to come across and be moved by was the importance of the indigenous tribes in Canadian culture.  Opening the Annual Meeting and pictured here, Esquimalt Nation Chief Edward Thomas’s welcome to their and the Songhee Nation’s ancestral lands, was moving, humbling and spoke volumes about the need for co-operation, partnership and tolerance the world over.  And the Aboriginal Housing Management Association’s Margaret Pfoh, a victim of the 60’s scoop where indigenous children were forcibly placed in non-indigenous families, spoke passionately about how there is not a housing crisis– there is a systems crisis.  We can’t just tinker round the edges – the whole system has failed and it needs to be replaced.

Pictured alongside Chief Edward Thomas is Nicole Waldron, the boundless and inspirational President of CHF Canada and member of Ontario’s Atahualpa Housing Co-operative.  Her never ending enthusiasm so captured the spirit of the conference – hey – we got challenges but hell we ain’t going to let that stop the Canadian co-operative housing sector – yeah?

The “growing the sector” theme – building on a member-led vision, two years in the making – permeated through every session.  The scene, the framework and the challenge was set in stirring addresses from British Columbia MLA Selina Robinson, Minister of Municipal Affairs and Housing – speaking about the largest investment in affordable housing in BC’s history and partnership to build 5,000 new co-operative homes over the next 4 years (hey – the conference decided that wasn’t enough!!!) – and from Federal Government MP Adam Vaughan – discussing the recently launched National Housing Strategy, supported by $40 billion over 10 years, including the $13b Co-Investment Fund – a major opportunity for Canadian co-operative housing.

The responses I saw from co-operators was same mix of positive, practical and – OK – lets get on with it – that I would have seen from members in our English sector.  A full day long (!) workshop session on Growing the Sector, facilitated by CHF Atlantic region Programme Manager Karen Brodeur, generated interaction and debate throughout, with many issues and challenges being raised similar to our UK sector.  However, some of the negative incentives for growth faced in Canada we do not face – leased land where leases will shortly come to an end; operating agreements attached to Government subsidies for low income households also due to come to an end; and lack of asset management strategies (in some cases caused by past Governments clawing back reserves) are focussing minds.  My sense was that the challenge that Canadian co-operators and CHF Canada face is how they will marry these negative incentives with the more positive incentives of Co-operative Housing for All – a mantra that echoed through the Annual Meeting – and reinforced by the human stories of how co-operation in housing makes such a positive community difference to the lives of the Canadian co-operators.

So onwards – the next five weeks is about me piecing all this together – visiting many of the people I met briefly at the conference as I travel East.  Next up – Vancouver, the wonderful work of CHF BC, Vancouver’s Community Land Trust, and many excellent Vancouver housing co-operatives.  Can’t wait…   Oh and I am getting there by seaplane!!!